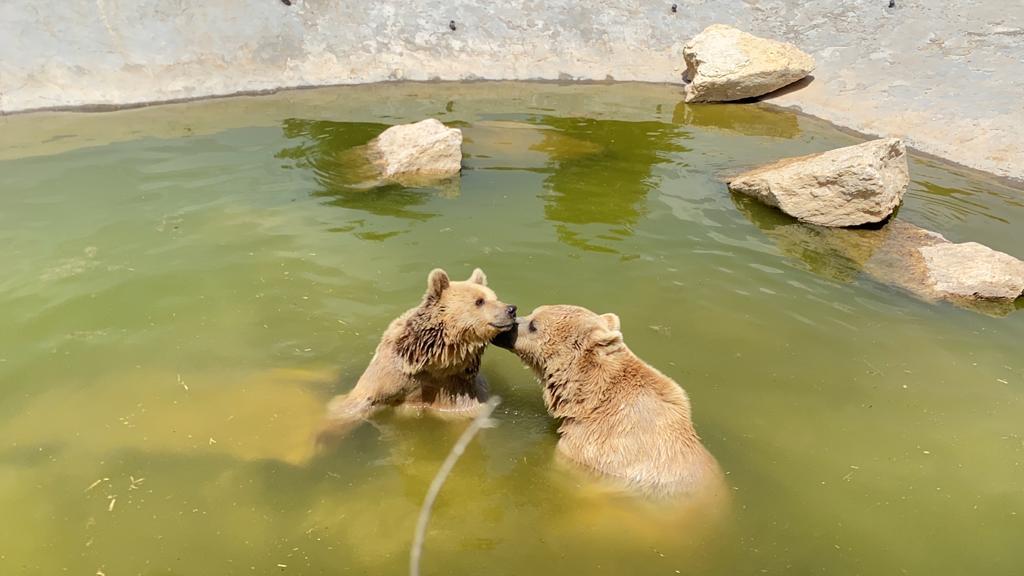 Balou, a Syrian Brown Bear confiscated from a sad situation in a local zoo,
joined New Hope in 2010. At that time, Al Ma’wa had not yet been
established. He had lived in a small barren enclosure with a tiny trough of
water in which he seemed the happiest. He was reportedly beaten to come
out of his night room daily so that he would be visible to visitors. Upon
arrival, he appeared to be completely shut down inside. We were told by our
partners in Four Paws that he was beyond depressed and in fact had given up
hope. His eyes were vacant pools of apathy. He would sit in his night room
and occasionally peer out of the window but immediately hide again if he saw
people looking. However once we managed to install a donated bath tub for
him, it became clear that he enjoyed that at least, as it would be full at night
and empty by the following morning with a trail of water showing that he had
gone back to his room as soon as he heard the staff coming . After a few
weeks while we prepared a new outdoor enclosure for him, we realised that
he was scratching away at the wall of his night room and removing one brick
a day which he would place tidily on the ground inside him.
Shortly after Balou moved to his outside area Stefan Knoplfer, a bear
behaviorist from Austria, was sent by our partners Four Paws to assist in
Balou’s recovery. This involved hours of sitting patiently talking to him from
outside the fence. After a while Balou would come to the entrance to his
night room and lay only with his face and paws visible, but receptive to the
human voices. Stefan said that this was a great step as he was not so afraid as
he had been and was willing to be quite close to people in a position from
which he could not get away in seconds.
From then, he began to be more adventurous and venture out while people
he knew and trusted were close by on the other side of the fencing- offering
treats of nuts and honey-covered apples. It was so beautiful to see him finally
coming out of his shell, as he happily sat munching on the apples, although at
first he would tremble and run back inside at the mere sound of a car across

the valley or any strange voices approaching. To see such a powerful creature
so traumatized by humans was shocking.
Balou was moved to his new much larger enclosure in Al Ma’wa in 2016. He
was a little shy upon arrival and reverted to his former habit of staying in the
night room, but within a few days he began to explore and enjoy his new
home. Over the next few months, with exceptional efforts from the whole Al-
Ma’wa team Balou grew to become a very happy and confident bear, who
enjoyed greeting visitors and roaming his enclosure!

Lula, a Syrian Brown Bear, was rescued by Four Paws from Mosul Zoo – Iraq
and brought to the New Hope Centre in July 2017 where she underwent a
rehabilitation programme. She was then transferred to Al Ma’wa Sanctuary
in February 2018. It is approximated that Lula was born in 2010. She enjoys
napping in a bed of hay. She also loves to swim in her pool and paddle water
out of her trough!

Although both bears were happy in their enclosures, it appeared that they
seemed a little bit lonely. Through careful consideration and planning, the Al
Ma’wa team began introducing the two bears to each other in the hopes that
they could live in the same enclosure. To begin this process, they were both
moved to neighbouring enclosures to get used to each other through the
smell of one another. They enjoyed sniffing and watching each other. When
the Al Ma’wa team felt that they were ready to be fully introduced, they were
released into the same enclosure with precautions in place, should any of
them feel uncomfortable. Balou, our big gentleman, surprised us all with his
gentle and cautious approach to Lula who seemed a little nervous as Balou
approached her. She quickly calmed down and allowed Balou to sniff her, this
time without a barrier between them!
Both Lula and Balou now really enjoy the company of each other and Lula has
even shown Balou how much fun it is to paddle water out of the water-
trough! They also enjoy swimming in their pool on hot days and foraging for
food together.
Although this process took a few patient months to complete, we can
honestly say that is has been so worthwhile! The joy that both bears now
have is unmatched and we really look forward to see how their relationship
blossoms! 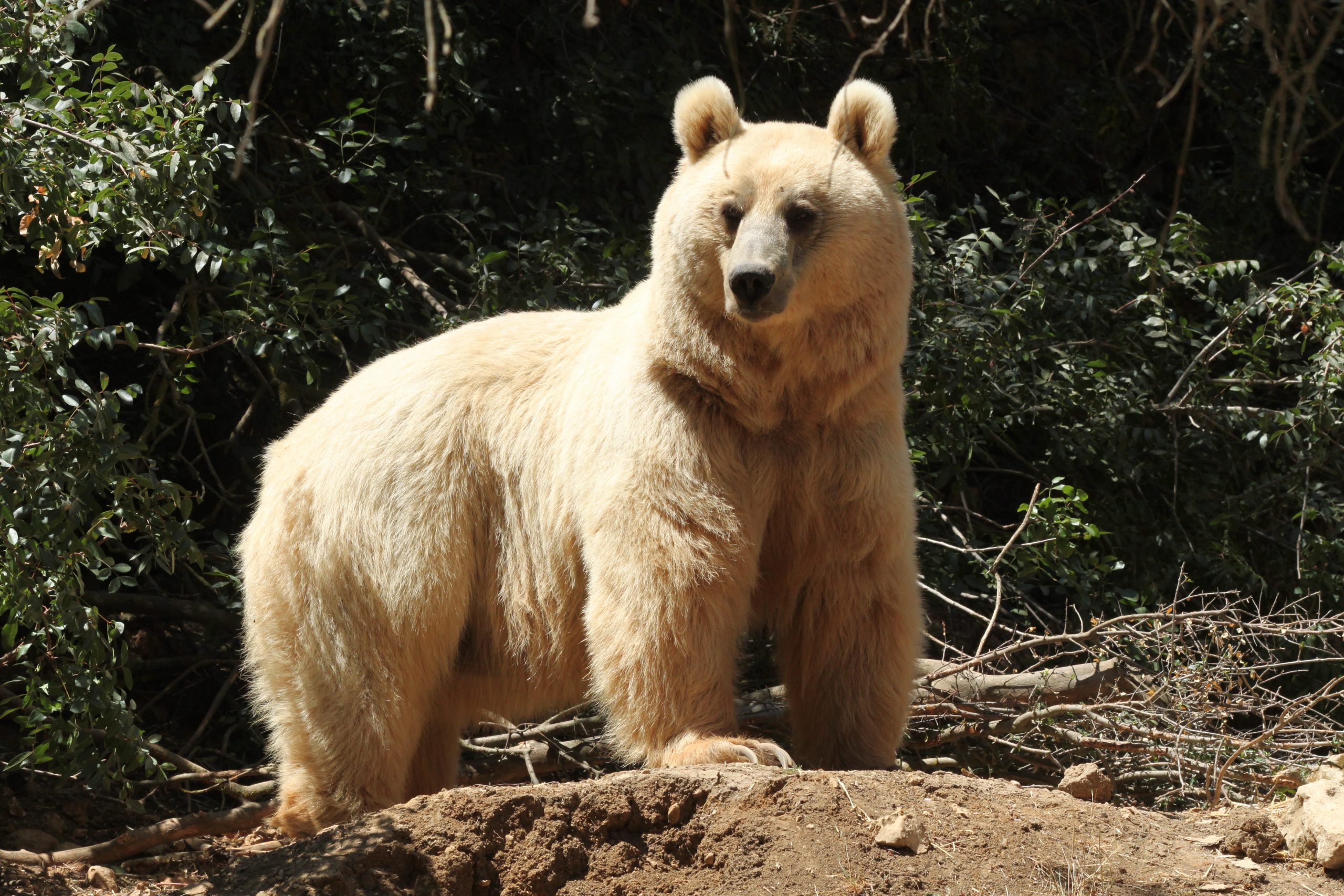 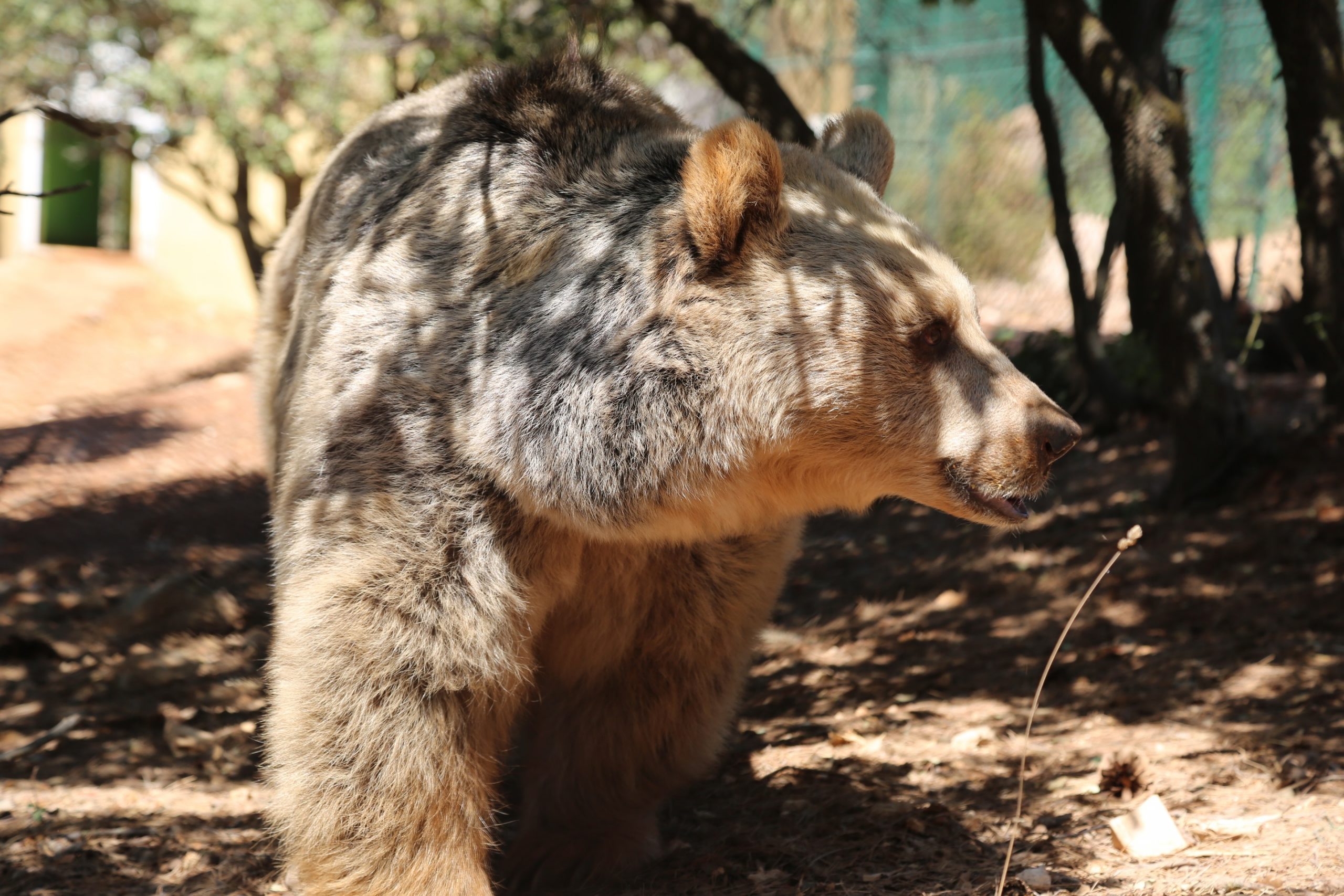 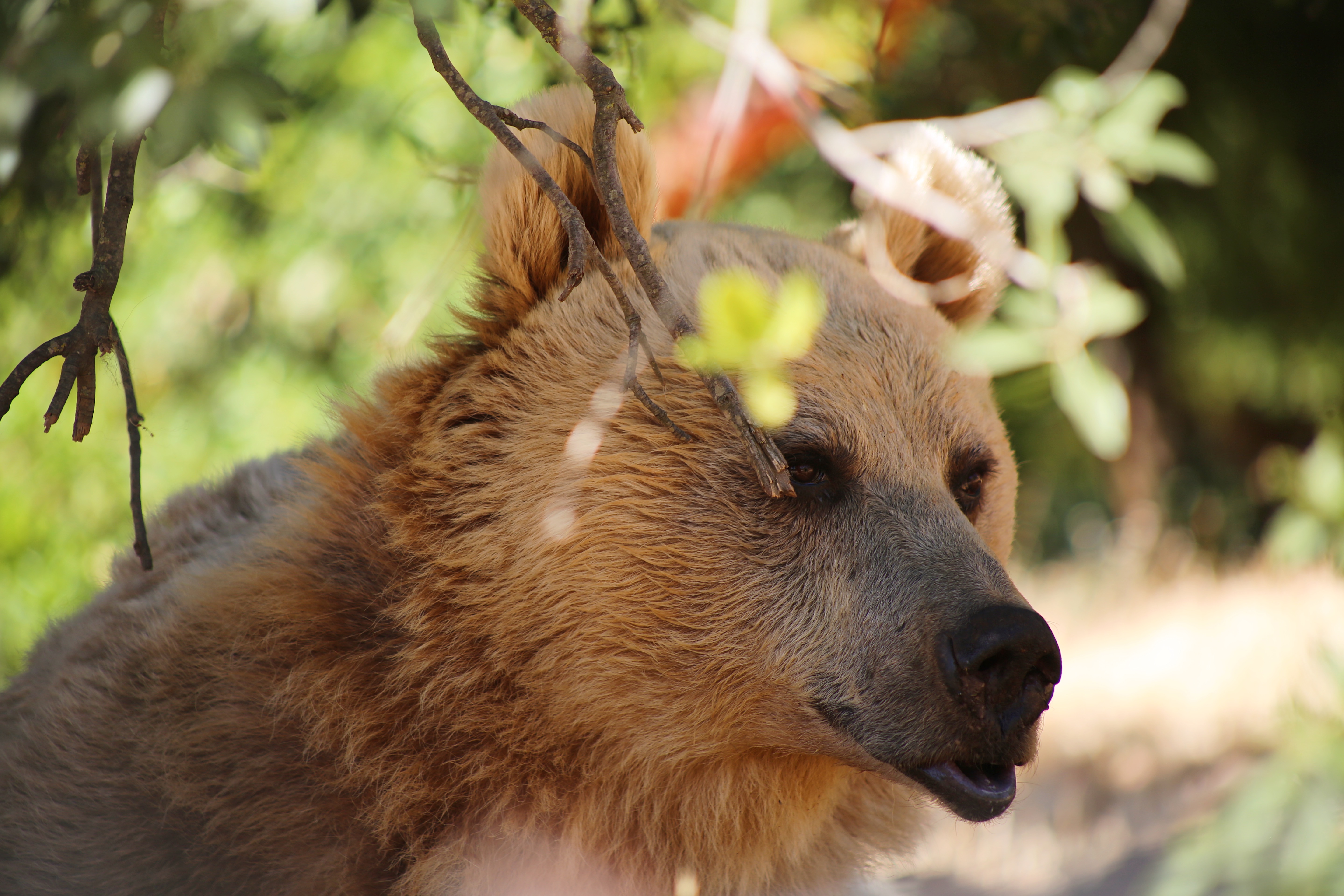 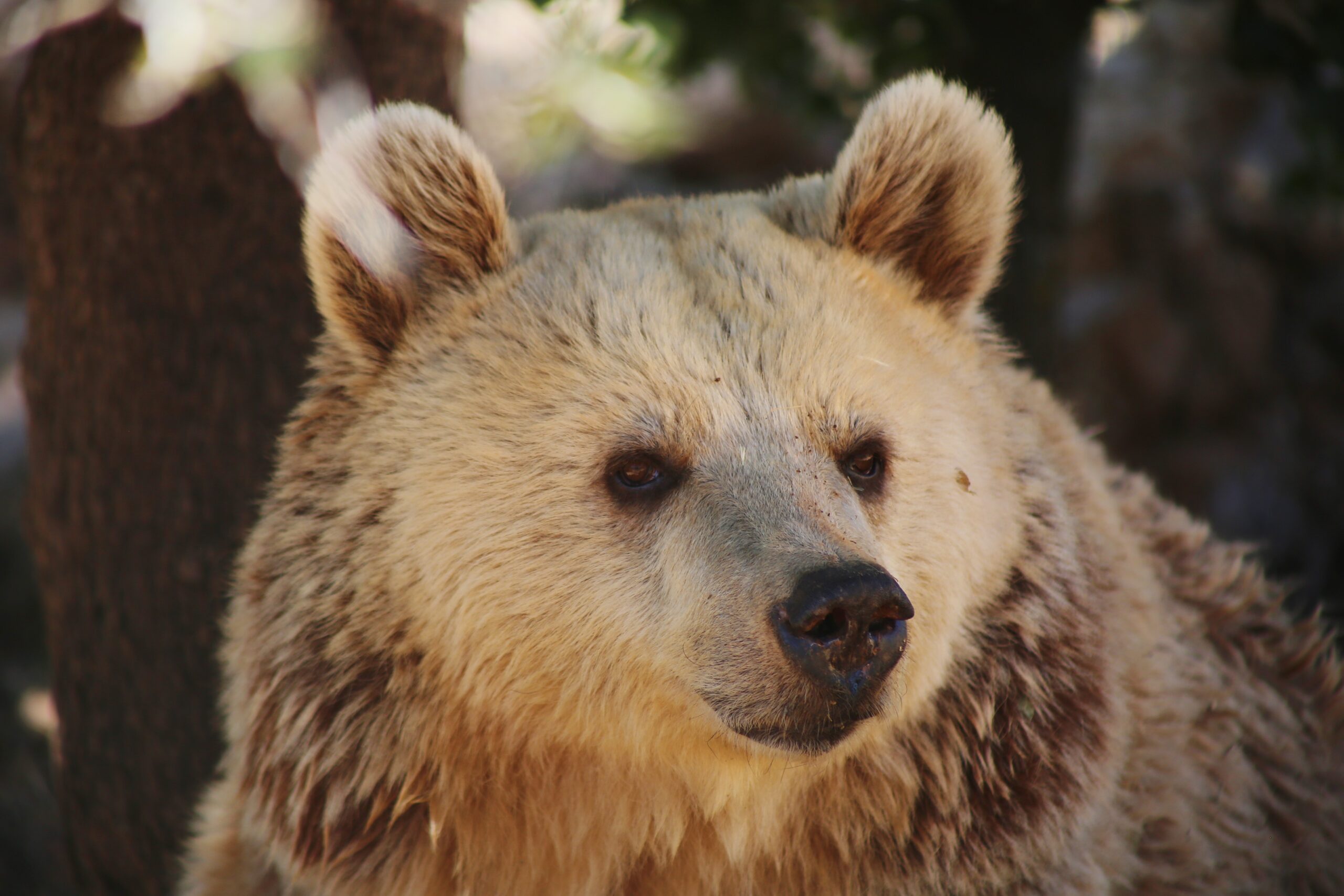